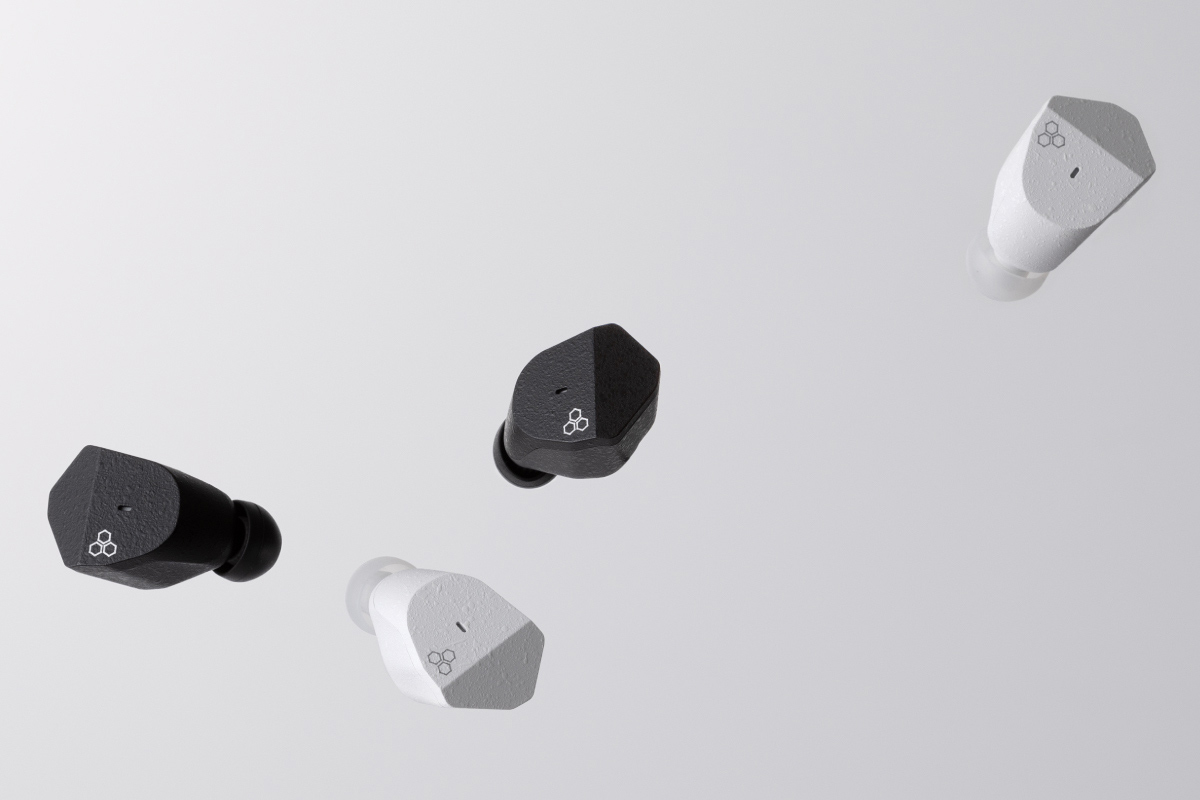 A new classic audiophile-grade truly wireless earbuds with its sound designed based on the latest research results in acoustic engineering and psychoacoustics.

The ZE3000 takes its name from the E3000, the brand’s most widely recognized wired earphones, which have sold hundreds of thousands of units since its launch in 2017 and have won an unprecedented ten consecutive Gold medals at Japan’s largest audio awards, the VGP. At the time of the E3000’s launch, most earphones in the same price range were designed to make an impactful impression at first listen, with an ostentatious sound that emphasizes both the low and the high frequencies. In contrast, we’ve chosen to create a natural sound that does not purposely emphasize any frequencies for the E3000, but to create a sound which is pleasant to be listened to based on scientific knowledge of acoustic engineering and psychoacoustics. It is not designed to bring an impactful surprise at first listen, but it is designed to allow you to concentrate on enjoying your music, and as a result, it’s been highly praised by end users, especially on social media, and eventually has become the absolute reference at the segment. When we started to design the ZE3000, without a doubt, we set our goal to surpass the sound quality of the E3000. However, it would be difficult to achieve the same sound quality in truly wireless earbuds as in a wired earphones due to several limitations.

The first challenge is truly wireless earbuds are having batteries, electronic circuit boards and antennas occupying most of the space inside the housing. This means that there is less freedom to create a perfect acoustic chamber to achieve a high quality sound. In addition, the waterproof feature which is commonly expected is forcing the housing to be completely sealed without a single vent to regulate the air pressure inside the acoustic chamber resulting the low-frequency sound becoming overwhelming and causing the overall clarity to degrade due to the auditory masking effect. One of the common countermeasures by the other brands is to increase the presence of the high frequencies to regain clarity but this leads to fatigue after long period of listening. In order to avoid such issue, by fully utilizing the unoccupied acoustic space inside the ZE3000 and our knowledge in fluid mechanic engineering, we introduce a newly developed “f-LINK Damping System” that optimizes the pressure in the acoustic space inside the earbuds housing to create a sound equivalent to wired earphones without the need for external vents. This system makes it possible to achieve both waterproof performance and well-controlled sound production in the low-frequency range, making it possible to achieve the iconic natural sound production of E3000 in truly wireless form.

The other problem is distortion*. Today, distortion in superior audio equipment, such as amplifiers and DACs is extremely low which is around 0.0001%. In contrast, even in superior earphones, the distortion generated by the driver unit (speaker part) inside earphones is normally more than 3% in the low-frequency range. In other words, there is over 30,000 times more distortion occurs in the process of converting electrical signals into sound in the driver unit (speaker part) of earphones. If we could reduce this distortion significantly, the sound quality would improve dramatically. That’s why we’ve reviewed every aspect from the manufacturing process in order to realize “f-Core for Wireless”, a newly designed driver unit that achieves ultra-low distortion. The result is that all the fine details of each note are revealed and even the decay of reverberation can be heard all the way through to the end, with the breadth of the musical space felt.

The ZE3000’s “f-LINK Damping System” creates a natural sound similar to that of wired earphones, while the newly developed “f-Core for Wireless” driver unit delivers ultra-low distortion, resulting in a sound quality that is unmistakably different from conventional truly wireless earbuds. We want to convey the intentions of artists and creators as they are by creating a clear and natural sound through ultra-low distortion.

In addition, the shape of the housing and the ear tips “TYPE E Truly Wireless Exclusive Edition”, which has been cultivated through the development of wired in-ear earphones to achieve excellent wearing comfort, suppress external noise and achieve excellent noise isolation performance.

It took a long time to develop, but we are confident that we have created a product that we can recommend as the new classic for truly wireless earbuds.

Truly wireless earbuds often rely heavily on software equalization to adjust the sound characteristic, which generates issues that can be a side-effect and lead to a tiring listening experience. With the ZE3000, instead of fully depending on the equalizer, we’ve improved the fundamental performance of the driver units and optimized the acoustic space inside the earbuds to perfect the sound quality so that it is satisfying enough to listen to and equalizer is only utilized to make precise pinpoint effective corrections in narrow bands. However, in order to make the best use of this equalizer pinpoint correction, a driver unit with extremely high precision sound pressure frequency characteristics is required. If there is a variation of about 3dB level, which is the typical accuracy, the equalizer correction will lead to unnatural results. In order to solve this problem, we have developed a new “f-Core for Wireless ” driver, which has been manufactured from scratch to achieve ultra-low distortion. Typically, the diaphragm of an earphone is made through monolithic injection molding where plastic material is injected into a mold with the center and surround are formed at the same time.However, in the case of small-diameter driver units, tangential corrugations are normally added on the surround to stabilize the movement of higher amplitude resulting in a rotational movement of the diaphragm that causes distortion. In the case of “f-Core for Wireless”, the center is made of a special resin that is both light and hard. The surround of the diaphragm is made of a special, extremely flexible silicone, which ensures smooth and undistorted diaphragm movement. With the combination of these 2 special materials, despite its 6mm diameter, the area of effect of its center is equivalent to that of a 9mm diameter monolithic injection molded diaphragm. This also contributes to the reduction of distortion. In addition, the special silicone surround and center are directly molded together without the use of adhesives, which improves assembly accuracy and significantly reduces weight, thus contributing to a reduction in distortion. 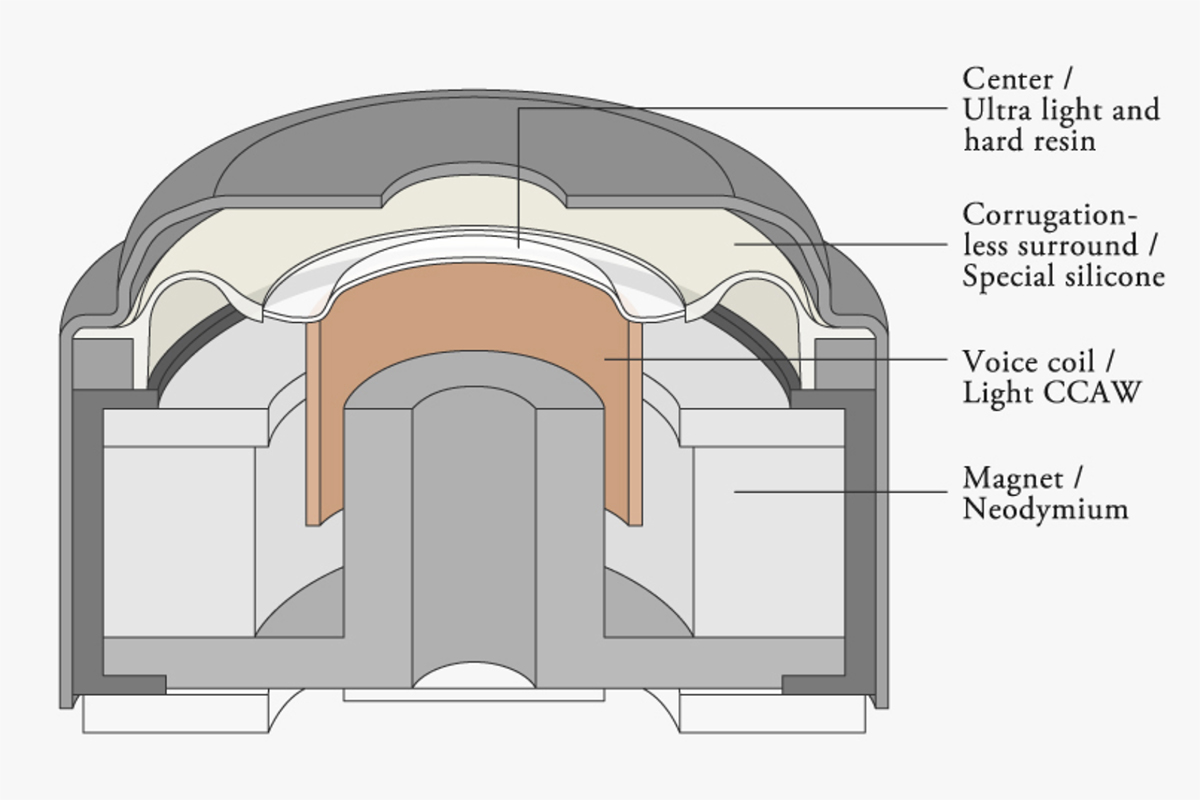 With these thorough distortion reduction measures, it has become possible to clearly distinguish the small notes of each sound that were difficult to hear. Furthermore, even the decay of reverberation can be heard all the way through to the end, with the breadth of the musical space felt. 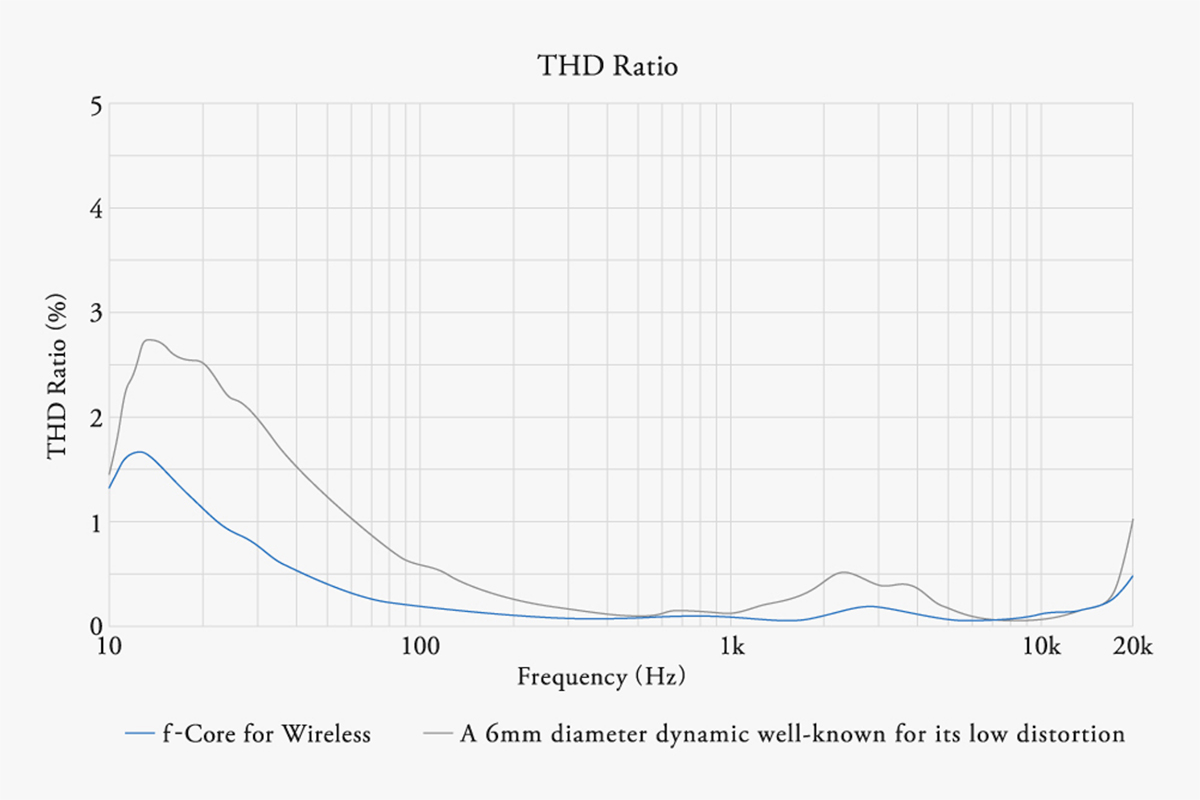 Truly wireless earbuds are having batteries, electronic circuit boards and antennas occupying most of the space inside the housing. This means that there is less freedom to create a perfect acoustic chamber to achieve a high quality sound. In addition, the waterproof feature which is commonly expected is forcing the housing to be completely sealed without a single vent to regulate the air pressure inside the acoustic chamber resulting the low-frequency sound becoming overwhelming and causing the overall clarity to degrade due to the auditory masking effect. Most manufacturers opt to increase the high frequencies in order to balance up the overall sound presentation and eventually the sound becomes overemphasized on both low and high frequencies, resulting a less natural sound with a tendency for vocals to become distant.

The ZE3000 features a new “f-LINK Damping System” that optimizes the pressure in the acoustic space inside the earbuds housing to create a sound equivalent to wired earphones without the need for external vents. This makes it possible to properly control the low frequencies that were difficult to achieve with the sound quality design of truly wireless earbuds, and reproduce vocals that tend to be far away in the balance intended by the artist. In addition, even in low-frequency reproduction such as drum kicks and bass lines, combined with the ultra-low distortion of the driver unit, we have achieved high quality that allows you to feel the fine and detailed expression of the bass range. 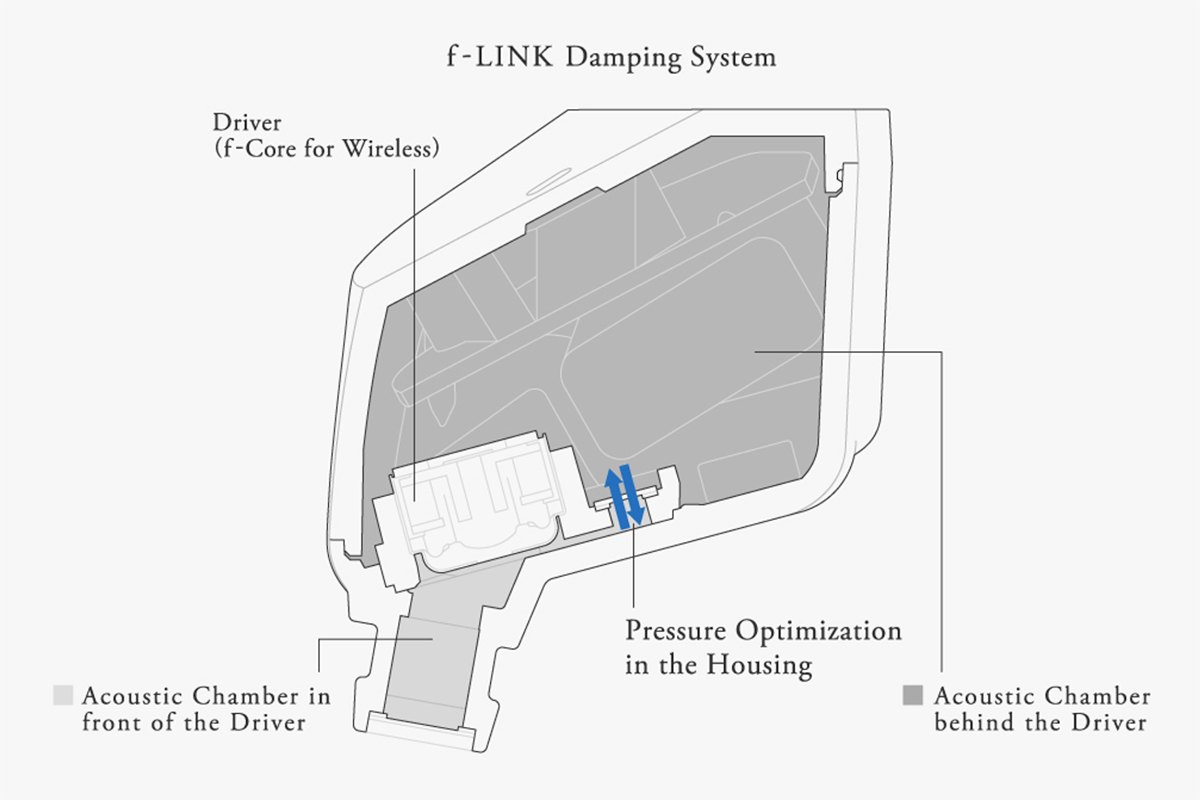 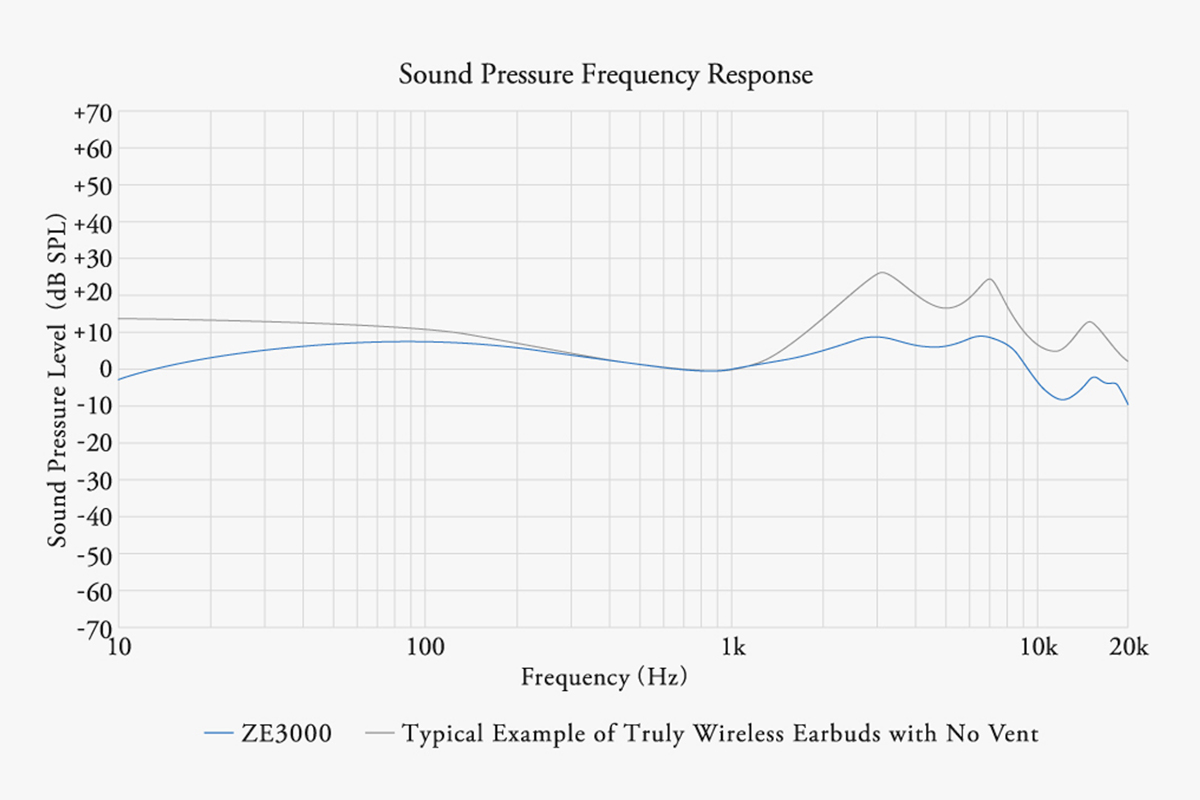 Compatible with a wide range of iPhone and Android devices and easy to pair. In addition to the SBC and AAC, it also supports the uninterrupted, high-quality aptX™. It also supports 48kHz/24bit wireless transmission using the Qualcomm® aptX™ Adaptive. 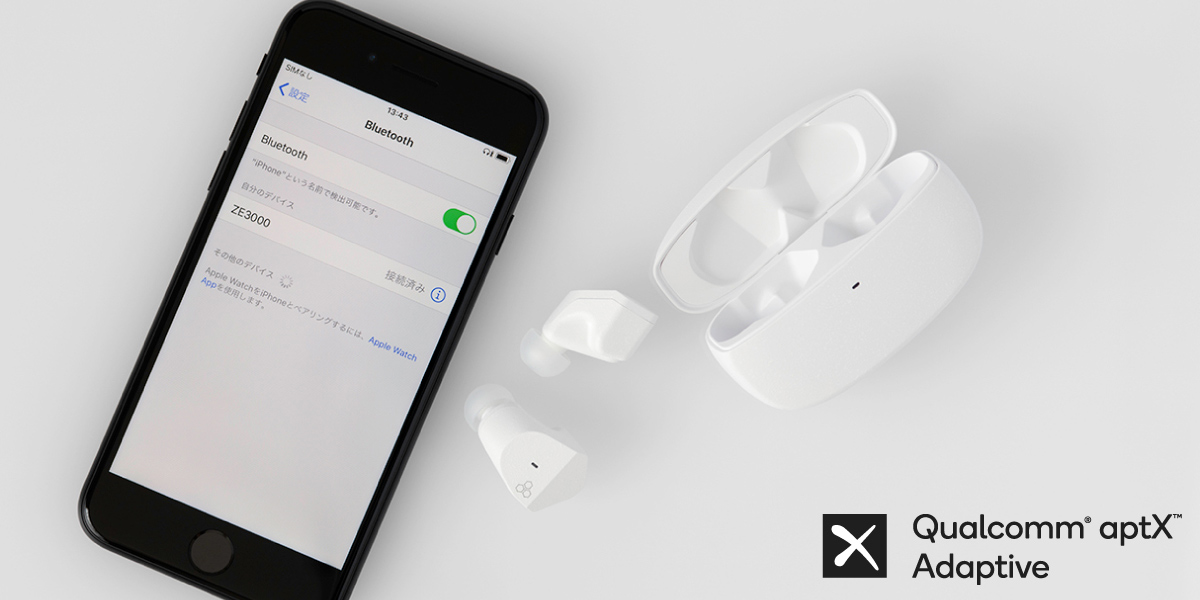 The ZE3000 achieves a superior fit based on the housing design, which is the optimum solution for in-ear fitting established with our conventional wired earphones. Whether or not the earbuds are comfortable to wear depends on how little oppressive they are. At first glance, the method of holding with the repulsive force of housing, such as choosing an organic shape with ergonomics, seems to be correct, but it always puts force on the ear, which puts a strain on the ear without noticing it, and fatigue accumulates. Compared to the shape that is organic and touches the ear on a large surface, the shape that limits the contact area aims to provide a comfortable fit without feeling oppressive. The ZE3000 housing can be held at three points for a stable fit. The 1st point at the cavity of concha (Pink), the 2nd point at the ear tip(Green), and the 3rd point at the tragus (Blue) as shown in the figure below. Therefore, it fits every ear. If there is no feeling of oppression at all points of contact, you will feel that wearing earbuds is so comfortable, and it is an excellent wearing feeling as if it were a customized earbuds just for you. 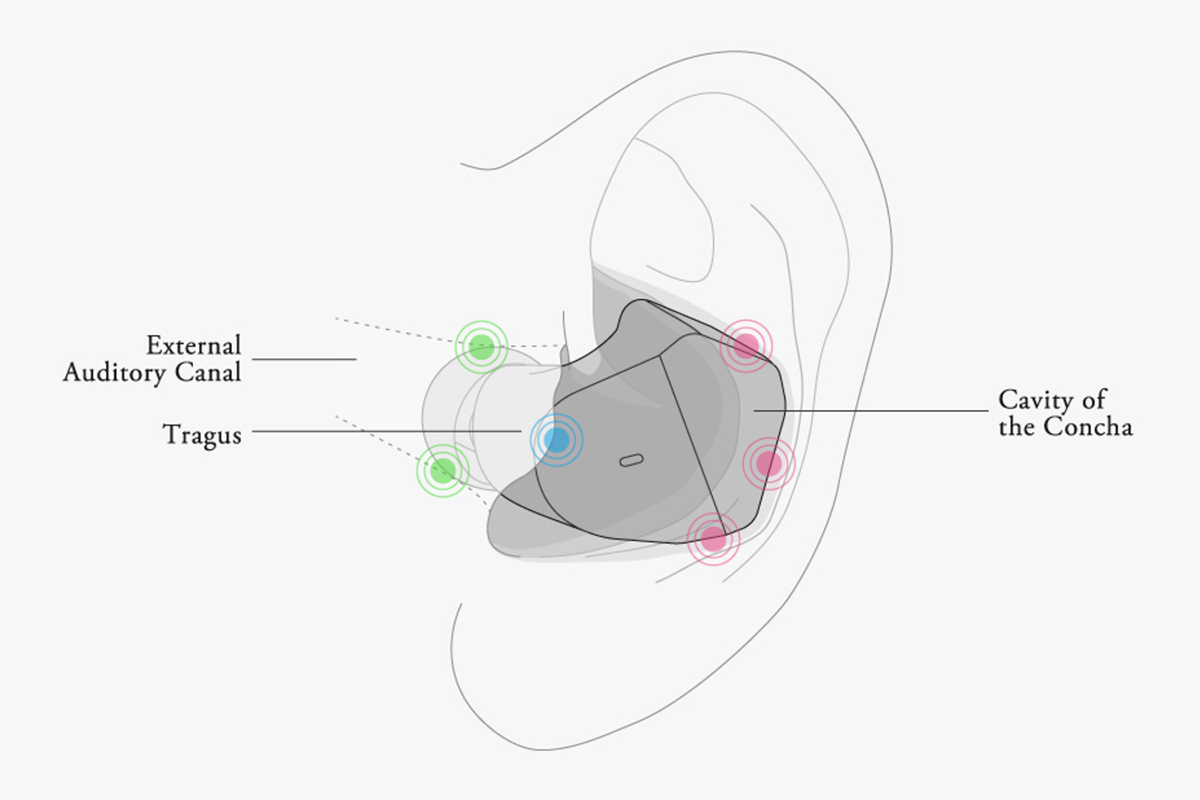 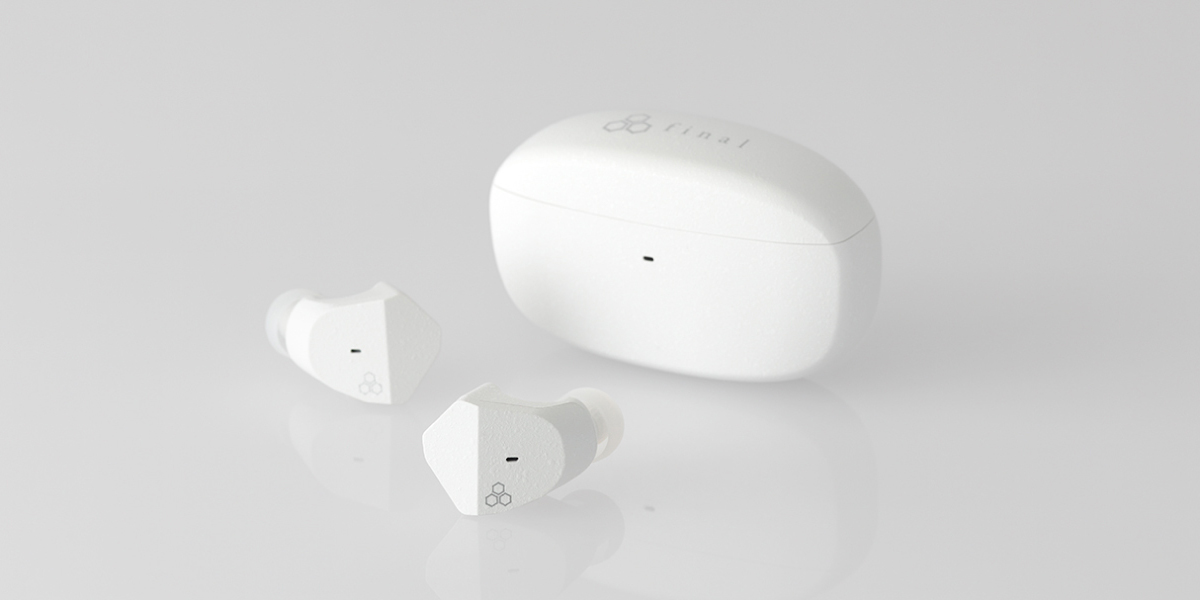 5 sizes of final newly designed “TYPE E Truly Wireless Exclusive Edition” ear tips are included as accessories. Generally speaking, many competing ear tips are shaped in such a manner that puts strong pressure deep in the ear canal which causes pain and fatigue after wearing them for a long time. The new “TYPE E Truly Wireless Exclusive Edition” ear tips are a type that fit softly into the entrance of the ear canal, and so there is no sensation of a foreign object. By minimizing the sensation of fit itself, we have achieved the “Supreme Highest Sensation of Fit”. Moreover, because the core color of adjacent sizes is different (ZE3000 Black : alternating between dark grey and light grey, ZE3000 White : alternating between clear and white), it has become easy to distinguish between sizes. There are 5 sizes provided which are SS / S / M / L / LL. In addition, since these earbuds are often attached slightly shallowly at the entrance of the ear canal, the L size ear tips are attached by default. 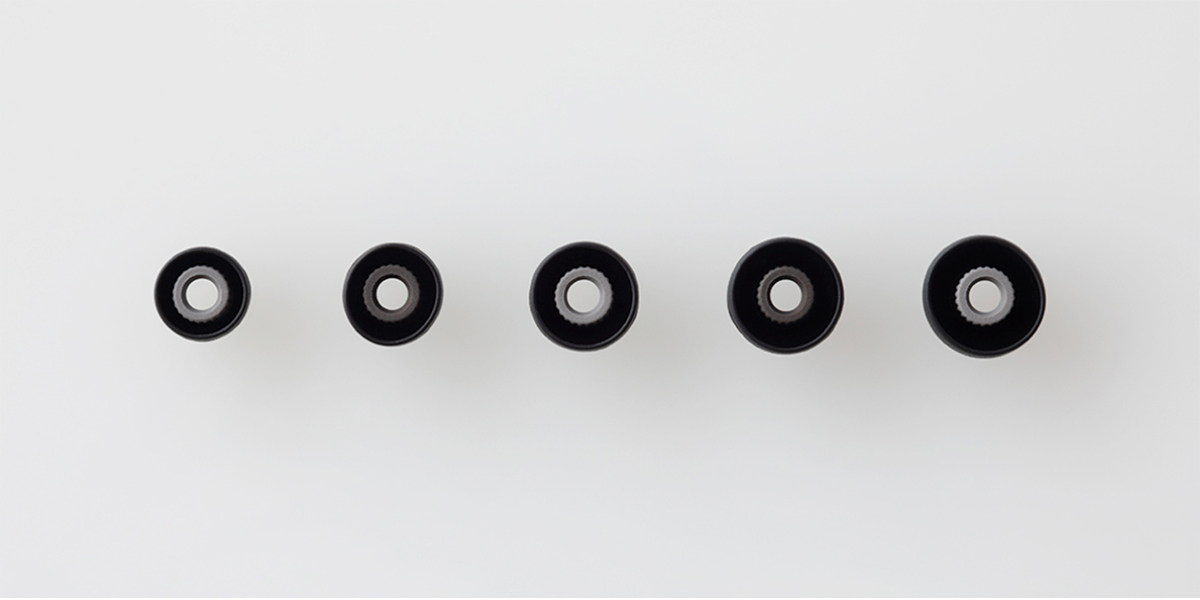 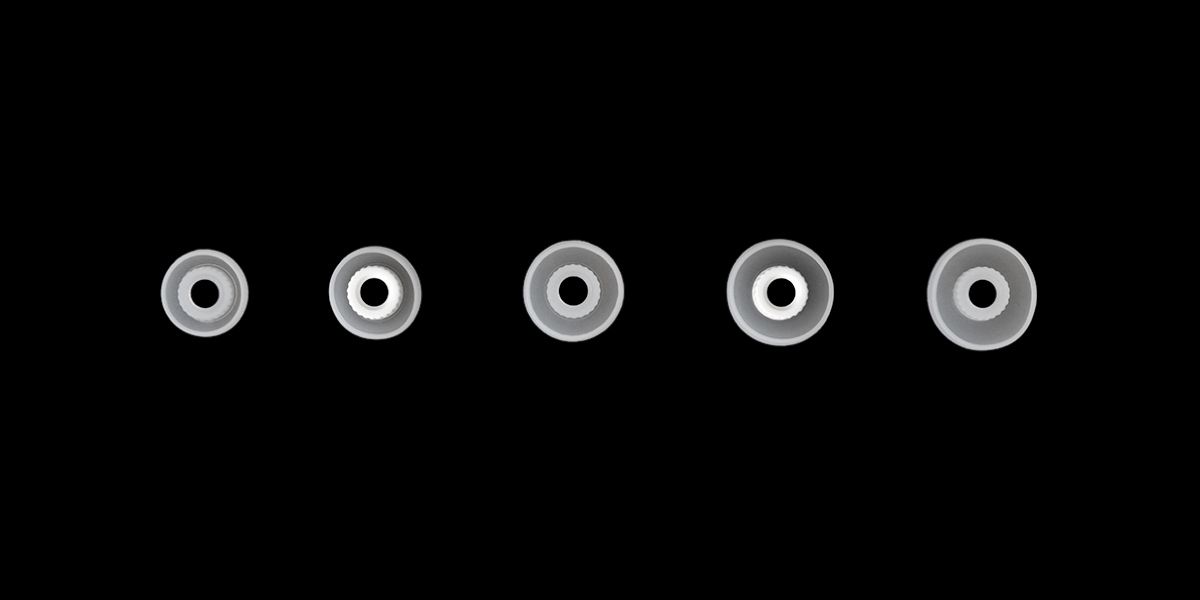 The ZE3000 supports touch operation, so you can easily operate music play / stop / volume up / volume down / next track / previous track and call / end call. The touch point is on the triangle-like surface on the faceplate of the earbuds (the side where the logo is not printed), and this design is to avoid erroneous operation when wearing it. 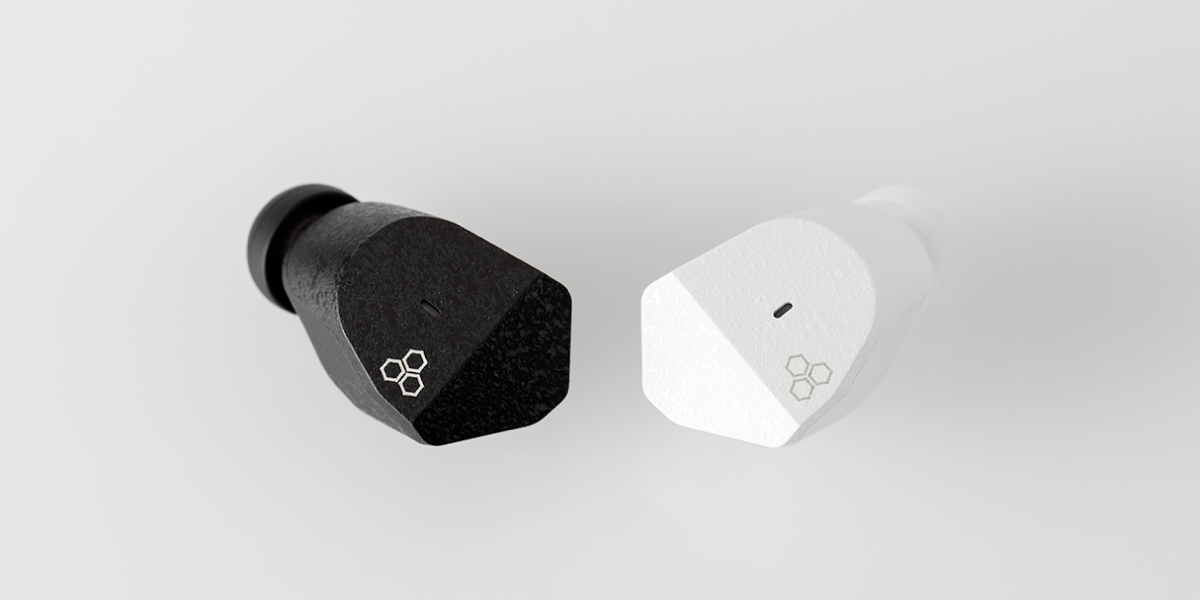 The IPX4 Water Resistance rating makes ZE3000 suitable for sports and active lifestyles. Rapidly changing weather conditions will not stop you from enjoying your favorite music or other entertainment contents. 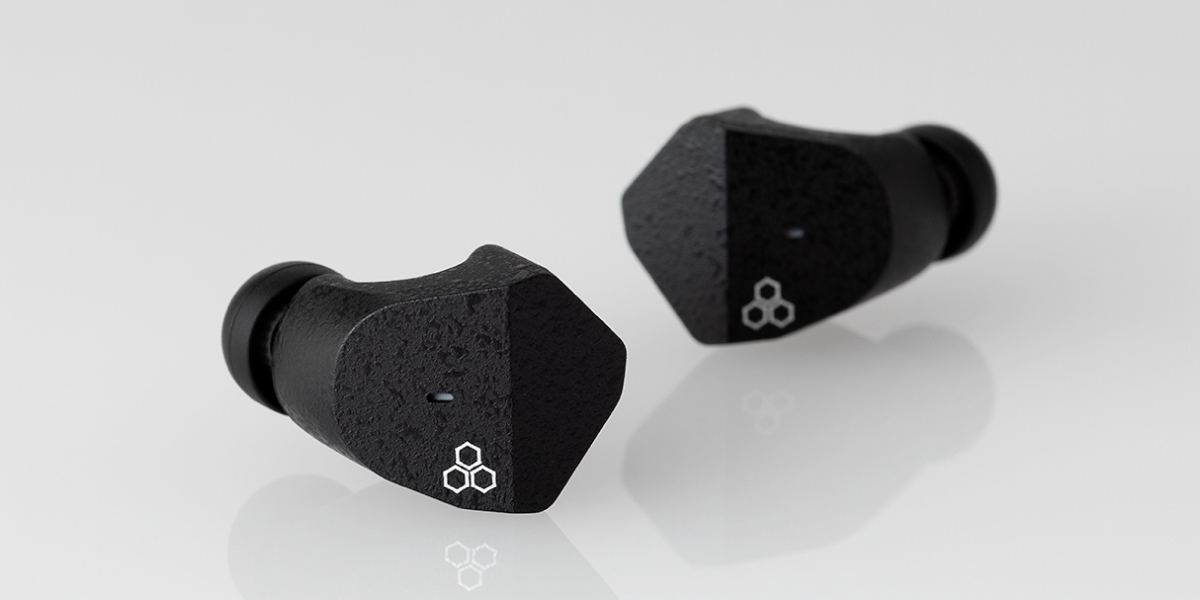 In addition to its thin and compact size, it can be easily opened and closed with one hand, and we are particular about the shape that fits comfortably in the hand when grasped which is realized through repeated prototyping and actual human evaluation.

2 color variations, BLACK and WHITE. Although the earbuds body and charging case are lightweight resin housings, they have a soft-textured Shibo* coating reminiscent of the parts of a high-end camera. Normally, such Shibo coating is applied only on a metal surface, but we have developed and realized a special process that can also be applied to the resin surface.

* Shibo; an old Japanese word meaning a wrinkle on the surface of paper or leather. 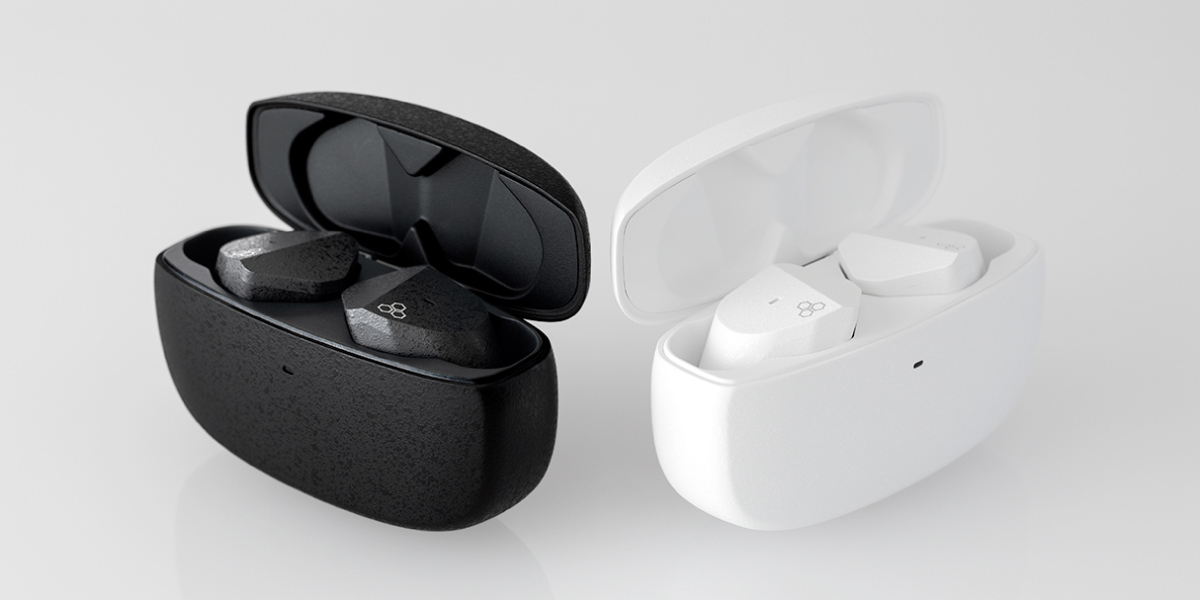 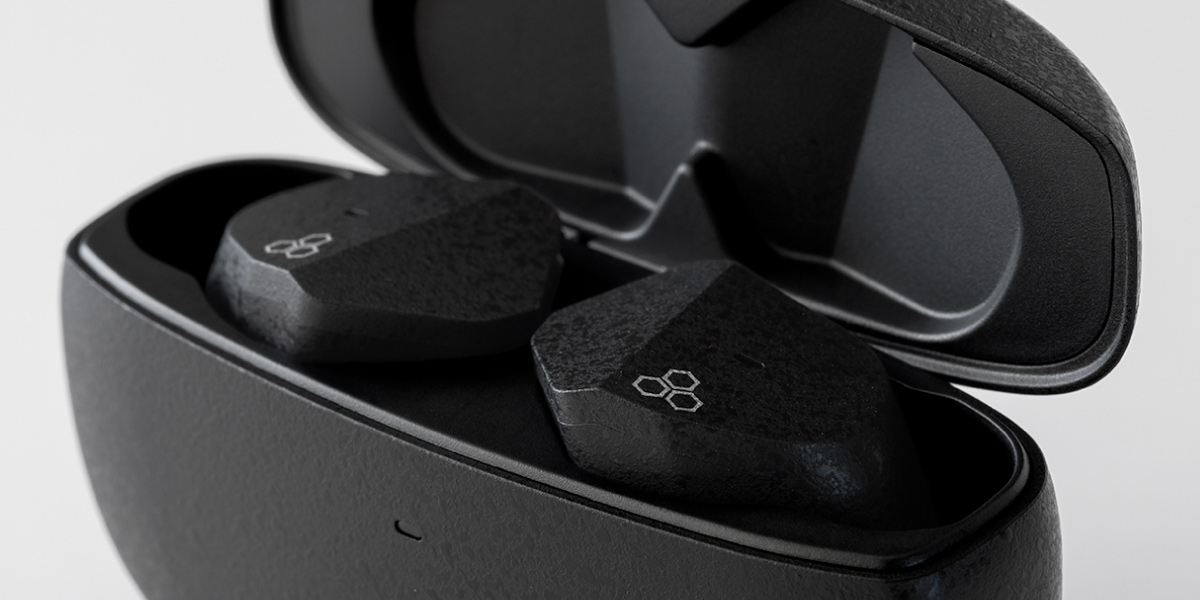